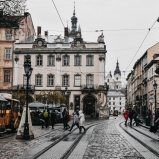 • Results of the survey carried out by the Sociological Group Rating on July 3-12, 2020 among the residents of Lviv, revealed that the state of local things is assessed relatively better as compared to the overall situation in the country. Thus, only 11% believe the country is heading in the right direction, 70% share the opposing opinion. 28% think the city is heading in the right direction, 48% - in the wrong direction. Younger respondents and those with higher income are more likely to give an optimistic assessment at the city level. At the same time, with regards to the country, there is no significant difference in age and property demographic groups. “Sluha Narodu” supporters are relatively more optimistic about the direction of the country's development. Over the last six months, these moods have deteriorated.

• At least two-thirds of respondents are dissatisfied with the performance of key heads of state and parliament. Thus, only 16% of respondents are satisfied with the work of President Zelensky, 66% are dissatisfied. Only 8% are satisfied with the activities of Prime Minister Shmygal, 62% are dissatisfied, and 30% could not evaluate. Only 6% are satisfied with the activities of the Parliament, almost 80% are dissatisfied. Since the autumn of last year, the assessment of satisfaction with the performance of central authorities has worsened.
• 48% are satisfied with the performance of Lviv Mayor A.Sadoviy, 33% are dissatisfied. 29% are satisfied with the activities of the City Council, 38% are dissatisfied, 33% could not evaluate. 32% are satisfied with the work of urban public transport, 51% are dissatisfied; educational institutions - 28% and 36%, respectively; police - 28% and 47%; communal enterprises - 23% and 60%; social protection services - 22% and 36% (42% could not assess); medical institutions of the city - 21% and 62%. Assessments of the city's spheres have deteriorated since the beginning of the year.
• The military conflict in the East of the country (62%) leads the ranking of the national importance problems among respondents. Despite this, Lviv residents at the national level are also concerned about the lack of job, unemployment (32%), bribery and corruption in government (30%), low salaries and pensions (29%), coronavirus epidemic COVID-2019 (24%), low quality healthcare (22%). At the personal level, respondents also consider the war in the East (44%) and low salaries and pensions (35%) to be the biggest problems. Lack of job is of a personal concern for 24%, bribery and corruption in government and the COVID-2019 coronavirus epidemic - for 23%, and poor quality of healthcare - for 20%.
• Among local problems of the city, Lviv residents are most concerned about traffic jams (45%) and tariffs for utilities (39%). Corruption in the city government is of concern for 34%, chaotic high-rise buildings – for 32%, drug addiction and alcoholism - 31%, lack of parking spaces - 21%. The quality of public transport services and poor condition of roads are perceived as problems by 19%, homeless animals on the streets, lack of places in kindergartens, low professional level of doctors, and the cost of public transport - 16-17% each.
• Improvement of the medical institutions performance - the main priority for the city authorities, according to citizens (52%). The quality of housing and communal services, public transport, garbage collection and disposal, and fight against corruption are perceived as priorities for the city authorities by about one-third of respondents; improvement of the educational institutions performance, jobs creation, and roads quality - about a quarter.
• The quality of roads, sidewalks and areas near buildings, development of tourism, and renovation of parks and squares - the main successes of Mayor A.Sadoviy, according to respondents (26-31%). 22% name street lighting among his achievements, 16% - quality of public transport, 11% - garbage collection and disposal and attracting of investments in the city.
• The leader in the ranking of political forces (elections to the City Council) is "European Solidarity" party - 28.2% of those who have decided and intend to vote are ready to support it. Samopomich is supported by 18.6%, Holos - by 9.8%, Sluha Narodu - 7.6%, Svoboda - 5.7%, and Batkivshchyna - 5.6%. The rating of other political forces is below 5%. About 14% of the polled have not decided on the matter.
• Among the candidates for the post of mayor, Lviv residents reveal the best attitude towards A.Sadoviy - 43% are positive, 27% - neutral, 29% - negative. 32% have a positive attitude towards R.Koshulynskiy, 21% - neutral, 15% - negative, and 32% do not know him. 25% reveal a positive attitude towards O.Sinyutka, 26% - neutral, 25% - negative, 24% do not know him. 21% have a positive attitude towards I.Zinkevych, 19% - neutral, 7% - negative, and 54% do not know him. 10% have a positive attitude towards I.Vasyunyk, 29% - neutral, 14% - negative, and 46% do not know him. 10% have a positive attitude towards V.Hirnyak, 26% - neutral, 11% - negative, 53% do not know him. More than 70% of respondents do not know other politicians. Considering the dynamics of the last four years, the attitude towards the mayor of Lviv A.Sadoviy has hardly changed (41-43%). Instead, the attitude towards R.Koshulynskiy (from 18% to 32%) and O Syniutka (from 17% to 25%) has improved.
• Among the candidates for the post of Lviv mayor, the leader is Andriy Sadoviy, who is supported by 38.1% of those who have decided and would take part in the voting. R.Koshulynskiy would be supported by 17.9% of such respondents, O.Syniutka - 13.8%, I.Zinkevych - 10.7%, V.Hirnyak - 5.4%, J.Rushchyshyn - 3.4%, I.Vasyunik - 3.4%. The rating of others is below 2%. About 16% have not decided.
• Modeling of the second round of mayoral elections showed that if A.Sadoviy and other potential candidates ran for office, the current mayor would win. Within a pair with R.Koshulynskiy with the result 45% against 32%, with O.Synyutka - 46% against 26%, with I.Zinkvych - 46% against 25%. At the same time, it should be taken into account that a quarter to one-third of respondents have not yet decided on their choice or do not intend to take part in voting in these combinations of the second round of mayoral elections.
Audience: residents of Lviv OTG aged 18 and older. The sample is representative in terms of age and gender.
Total sample: 1200 respondents. Personal formalized interview (face-to-face).
The margin of error does not exceed 2.8%. Period of the survey: 3-12 July, 2020.
Back to list 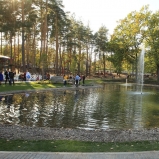 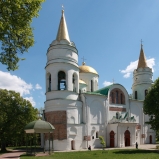