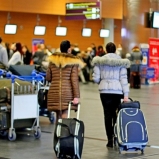 • According to the results of the research carried out by the Sociological group "Rating", 17% of the polled mentioned that their relatives had been working abroad over the last six months, 11% - have those in their families who work abroad on a permanent basis. At the same time, 70% of the respondents don’t have relatives, who have worked abroad over this period, 2% - were not able to answer this question.

• The highest number of those whose relatives have working experience outside the homeland has been recorded among the residents of the Western macro-region (especially Zakarpattya). Rural citizens and those with higher incomes have mentioned the presence of migrant workers in their families relatively more often.
• 65% of the respondents indicated that they would not have changed their country of residence. On the other hand, 27% stated that they had been making plans for emigration. The most often, the desire to move abroad was expressed by young respondents up to 35 years old (almost a half of them have such a desire). Moreover, the number of those willing to move is somewhat higher among men, people with higher levels of education and income. Significantly, among those with migrant workers in their families, the desire to move abroad for the purpose of living is much stronger.
• A relatively higher number of those who express their desire to leave Ukraine has been recorded among the residents of the Northern (Zhytomyr, Sumy oblasts and Kyiv city) and Western (Zakarpattya, Ternopil, Chernivtsi) regions.
• In its turn, the majority of the polled (50%) has mentioned Ukraine as the preferred country for their children residence. A quarter would have chosen the European countries for their children, 7% - the USA, 3% - other countries, and only 2% - Russia. 13% could not decide on the answer.
• Ukraine as a country of residence for their children has been more often chosen by older respondents, rural citizens, and those with lower incomes. In its turn, young people, those with higher levels of income and education have chosen other countries more often (most often - Western countries) as a possible place of residence of the next generation. Having migrant workers in the family also determines the choice of the country of residence for children and not in favor of our state: almost a half of the respondents, who have relatives working abroad, would have chosen other than Ukraine countries to be their children place of residence.
• Moreover, the highest number of those for whom foreign countries are more desirable in terms of residence for children has been recorded among those polled in Sumy, Zhytomyr, Chernihiv, Ternopil, Zakarpattya, Ivano-Frankivsk oblasts and Kyiv city.
Audience: residents of Ukraine aged 18 and older. The sample is representative in terms of age, gender, region, and settlement type. Total sample: 30 000 respondents (1 200 per region). Personal formalized interview (face-to-face). The margin of error does not exceed 0,6%. Period of the survey: 12-28 December 2017
Back to list 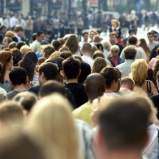