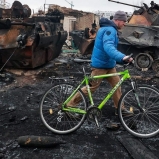 As a part of the eighth wave of the “Ukraine during the war” project, the Sociological Group “Rating” conducted a study of the psychological markers of the war: the strategies of adaptation to stressful situations as well as the levels of resilience and psychological exhaustion.

• Almost half of the respondents say that their emotional state is currently tense, while a third say that it is average. Another 20% say they feel calm. In general, the index of emotional stress is currently 3.5 points out of the possible 5 (last year it was 2.7). Women, those who are in difficult circumstances, and the elderly are more emotionally stressed.

• 51% of the respondents say that they are currently in normal circumstances. 44% have difficulties, but their circumstances are tolerable, and only 5% say they are in difficult circumstances. Those who were less affected by the war report being in normal circumstances the most. These are the residents of the western regions of Ukraine, those who are fully employed, as well as those who have not relocated anywhere.
• Most respondents use constructive strategies of adaptation to the challenging circumstances of the war: 50% actively solve problems and 13% seek support from others. At the same time, 35% opt for a more passive position: they are trying to wait out. Men, those who are employed, as well as those who are in normal circumstances respond to the challenges more actively.
• Despite high emotional stress, the vast majority of the respondents are at the moment in peaceful relationships with their relatives (94%), neighbors (89%) and even with strangers (67%). Nevertheless, 29% avoid strangers. At the same time, almost no aggressive relationships with different categories of people have been reported.
• Ukrainians demonstrate a good level of resilience: its index is 3.9 points out of the possible 5. Among the components of this index, psychological resilience (4.0) is slightly higher than maintaining physical health (3.8).
• Only 2% of the respondents have a low level of resilience. For most respondents (59%), it is at the medium level. 39% demonstrate high resilience.
• Most respondents are interested in what is happening around them (92%), have plans for the future (82%), and do not regret the past (77%). In addition, most are confident in their decisions (74%) and feel useful (65%). However, only half of the respondents take care of their health, while only a third do not feel tired. 40% have a good night's sleep. At the same time, most (83%) eat normally.
• People under 50 demonstrate slightly higher levels of resilience, mainly due to better physical stamina. Also, higher resilience is observed among men, as well as among those who are employed, those who are in relatively normal circumstances, those who can actively solve problems, and those who did not change their place of residence
• Today, only 2% of the respondents experience a high level of psychological exhaustion. For 71%, it is at the medium level, while for 27%, it is at the low level. Therefore, the index of the psychological exhaustion is below average: 2.0 points out of 5. Those who have not relocated anywhere, those who are employed as well as those who, hence, are in normal circumstances, demonstrate the lowest level of psychological exhaustion. Those whose jobs have been taken away by the war, are worse off: their psychological exhaustion is higher than the one of the retired respondents. More people among the younger respondents lost their earnings and decided to relocate. Therefore, unlike with the previous indicators, in this case, the younger respondents, not the older ones, are more psychologically exhausted. Those who are optimistic about the developments in Ukraine are also less exhausted.
Audience: the population of Ukraine aged 18 and older in all oblasts, except for the temporarily occupied territories of the Crimea and Donbas. The sample is representative by age, sex and type of settlement. Sample population: 1200 respondents. Survey method: CATI (Computer Assisted Telephone Interviews). Error of representativeness of the study with the confidence level of 0.95: not more than 2.8%. Dates: April 6, 2022.
Back to list 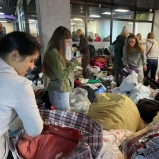 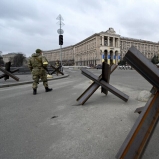